JIGMOD bridges the gap between components and the breadboard

For more than 10 years Ryan Clark used breadboards to build electronic circuits, but breadboards aren’t ideal. So, Clark invented a work around called JIGMOD, which is garnering media attention and financial backing from around the world. 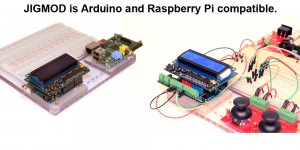 Clark graduated from the Bachelor of Technology (Electronics Engineering Technology) at RCC Institute of Technology in 2007. He lives in Kincardine ON, on the shore of Lake Huron, and currently works as a communications electronics engineer. But, back when Clark was studying at RCCIT, he said he identified a common problem when building circuits.

“When you want to incorporate a component that is not compatible with the breadboard then there is immediately a roadblock,” Clark explained.

It was six years later when he finally came up with the idea for a product to solve it.

“JIGMOD is a modular electronics construction system that makes it easier to build reliable electronic circuits, and they are high quality and easy to build,” Clark explained.

“In the last few days of the campaign, the worldwide electronics community not only reached the campaign goal, but doubled it,” Clark explained. “One backer said he has been waiting 25 years for the solutions that JIGMOD provides.”

Most electronic components aren’t compatible with breadboards. JIGMOD bridges the gap between those components and your breadboard.

“With JIGMOD the roadblock is removed and you can continue to progress and build your circuit using components that are not compatible with your bread board,” Clark explained.

“I think every student, electronics engineer, technologist or technician who is interested in building circuits could use JIGMOD and be impressed with the results,” he said.

Now, Clark said his focus will shift to building his company in a way that continues to be focused on his customers and helping them.

“The next step is making sure that my customers are happy. Some backers have also provided excellent suggestions for new products,” Clark said. “The campaign success is really good to see, but the feedback I get from my backers is equally important. The process of building the company is going to be highly iterative, and customer focused. It feels great to sell products that help people.”