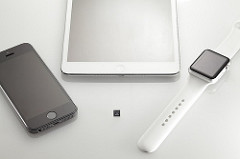 Remote wireless charging is seeing increasing demand as the mobile segment expands, wearable devices proliferate and the Internet of Things (IoT) brings smart networked appliances to home, office and industrial environments. The total market is expected to exceed $8.5B by 2018, according to IHS Research. Battery life and the need for battery exchange is restricting many applications due to size and hard-to-reach placement.  Ossia’s Cota multipath RF (Radio Frequency) technology is both safe and effective, providing the best user experience of any wireless power solution. As an Intel Capital Portfolio Company Ossia has also received direct investments from major telecoms and other strategic partners.

SWS’ charger chip (SWS1410) is being used to build the Cota Wireless Charger, which can deliver more than 10 watts of remote wireless power. The receiver chip (SWS1420), which will be embedded in portable devices and batteries, is capable of receiving up to 6 watts of power to charge energy-hungry electronics efficiently.

“Wireless charging solutions and going cable-free are changing the way we use and interact with everyday devices, opening the door for a host of new applications and consumer technologies,” says Hatem Zeine, chief executive officer, Ossia. “SWS had the deep understanding of our needs and was able to deliver an innovative silicon chipset in less than one year that was operational in a real environment. They were highly responsive, worked with us closely through all development phases, and were committed to offering a complete approach, from concept to manufacture.”

SWS worked closely with Ossia to transform the system-level concept of the Cota technology into an integrated, commercially viable two-chip solution that meets the strict cost, size and efficiency requirements necessary for high-volume consumer technology. The advanced first-generation chips are designed and manufactured on mainstream CMOS technology from partner GLOBALFOUNDRIES, with no special manufacturing process steps, in order to ensure high yield and low cost.

High levels of collaboration between Ossia and SWS, including frequent onsite visits, were the key factor in translating high-level requirements into detailed specifications for the SWS1410 and SWS1420 chipset, with the main focus on the commercial viability and robustness of the complete wireless charging solution. Ossia was able to leverage SWS’ experience, silicon-proven IP, and ISO-qualified design/verification methodology to realize a state-of-the-art chipset that was fully functional and ready for sampling in less than one year.