Four engineering students from the University of Waterloo appear to have found a legitimate solution to the age-old problem of prototyping printed circuit boards (pcbs) quickly and cheaply. Their solution – Voltera V-One is a laptop-sized pcb printer that can turn design files into prototype circuit boards in minutes.

No more delays. No more unnecessary expense of sending them overseas. And, there is more good news, as their invention has won them the international James Dyson Award – representing the first time a Canadian team has taken the top spot for the international award. 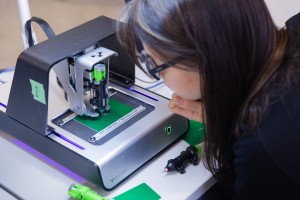 Voltera V-One is a laptop-sized pcb printer that can turn design files into prototype circuit boards in minutes.

Voltera V-One uses the same rapid prototyping principles that underpin 3D printing. It lays down conductive and insulating inks to create a functional, two-layer circuit board. But it’s also a solder paste dispenser, allowing components to be added to the board and reflowed by a 550w heater.

“When we first started the company, we spoke to many experts who told us we were too ambitious and that it was impossible to create a tool that could effectively prototype circuits. We took that as a challenge,” says co-founder Alroy Almeida.

Additive manufacturing has transformed how things are made and who can make them. Voltera V-One promises to do the same for electronics, according to the creative UoW team, comprised of mechatronics engineering graduates Jesús Zozaya, Alroy Ameida and James Pickard. Katarina Ilic is a graduate of nanotechnology engineering. As international winners of the James Dyson Award, the team will be awarded $54,000 to further develop their idea.

“We’re at a critical point with Voltera V-One. Our parts are being manufactured in China and we are doing further testing at our office and our assembly line in Canada,” says Jesús Zozaya, co-founder. “This award money will help us to ramp up production.”

The growth of personal 3D printers averaged 345% every year between 2008 and 2011 and consumer 3D printing is set to grow tenfold by 2018. But while 3D printers have opened the door to the maker and hobbyist movement, three quarters of the revenue generated will come from business, with industrial printers used for prototyping and manufacturing across multiple sectors. 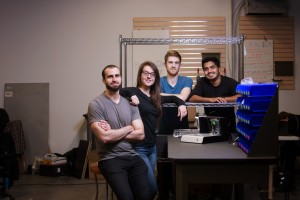 “The Voltera V-One team is made up of four impressive young graduates. Their solution makes prototyping electronics easier and more accessible – particularly to students and small businesses. But it also has the potential to inspire many more budding engineers. Something I am very passionate about indeed,” says James Dyson, of The James Dyson Foundation, which was set up in 2002 to support design engineering education, medical research and local charities in the Wiltshire area.